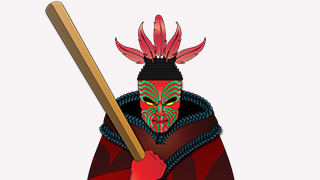 symbolic of man and war 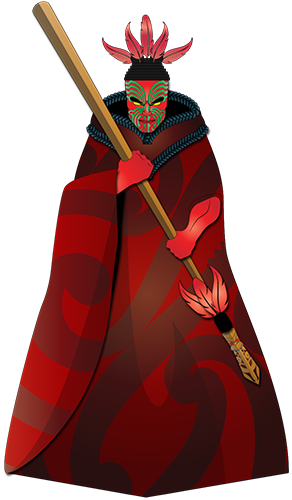 Tūmatauenga (or Tū) wanted to kill the Ranginui and Papatuanuku (his parents), but the others wanted to separate them. Tūmatauenga was angry at his other brothers for not helping him defeat Tāwhirimatea, so he fought them and defeated them. Through his actions he made his brothers ‘noa’ or common. He made tools and canoes out of the trees of Tāne, he fished up the children of Tangaroa and dug up Rongo and Haumietiketike.

He is holding a taiaha, his weapon of choice. Red is his principal colour and the pattern used represents speed and agility like that of a warrior in warfare and also a waka taua sailing to battle.