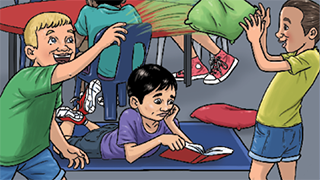 In this story, a teacher and students negotiate some rules for the classroom at the beginning of the school year. The analogy is made with the Treaty of Waitangi – in terms of a binding contract.

Students should be able to:

This story relates to the topic of Ngā Hākari/Celebrations (Unit 7) in He Reo Tupu He Reo Ora.

The learning intentions and success criteria below will help determine students’ progress.

The format of the rubrics is similar to that in He Reo Tupu, He Reo Ora, allowing for student self-assessment, as well as assessment by:

The three tohu/symbols in the rubrics indicate different steps of learning, as depicted in this poutama pattern. 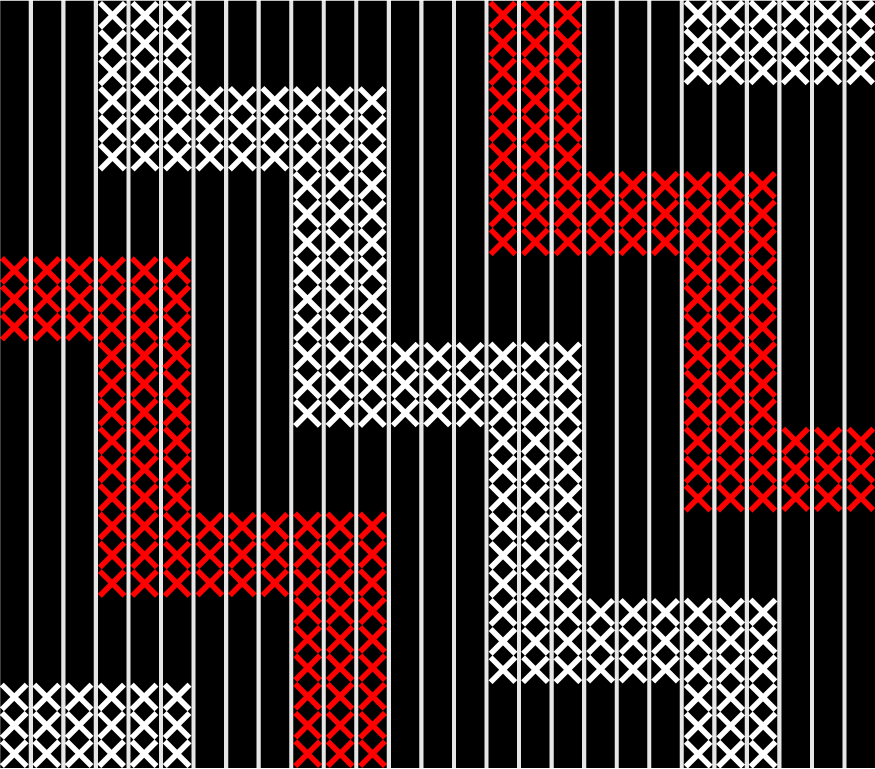 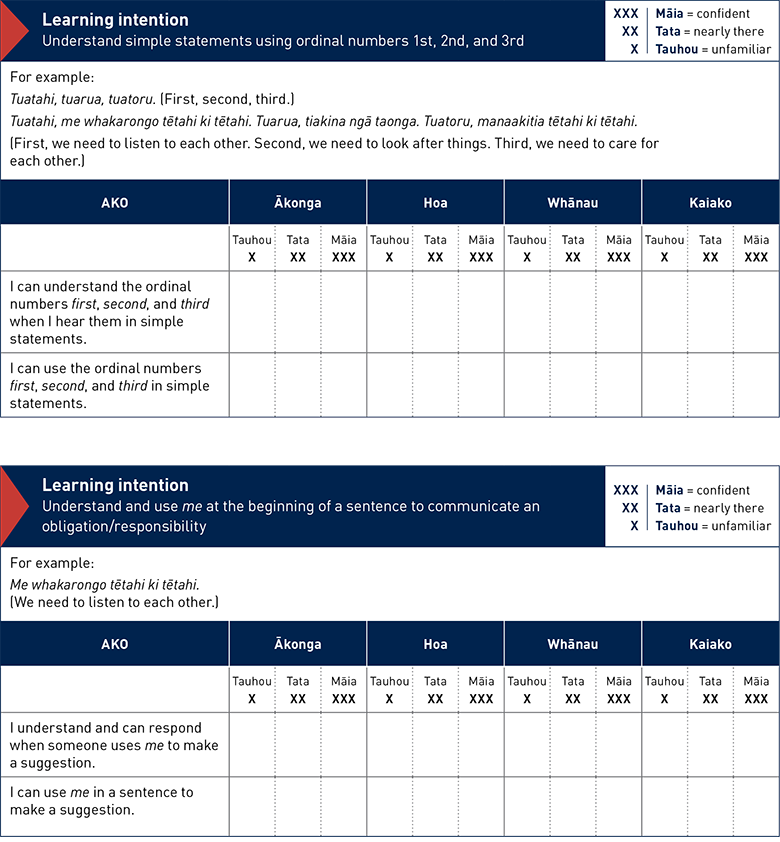 The Treaty – a way of addressing many wrongs.

(adapted from a song in Kiwi Kidsongs Waiata 15, by Hirini Melbourne)

The Treaty of Waitangi, New Zealand’s founding document, which is written in Māori and English, was signed by 540 chiefs/rangatira and the British Crown.

It was a document that had been hastily prepared in English, in just a few days, then translated overnight into Māori by missionary Henry Williams. It is therefore unsurprising that there are important differences between the English and Māori versions, – particularly relating to the words kāwanatanga, taonga, and tino rangatiratanga.

The Māori word for a contract is kirimana. It has been suggested that this word derives from kiri meaning skin and mana meaning legal or binding – emanating from the Treaty of Waitangi where some chiefs used the representation of the tā moko on their skin as their signature.

Before reading the story, talk with students to discover:

You could create flashcards to show images of the following content words:

Other words in the text include:

Note: Students will be familiar with the latter in the NZ national anthem, e.g., Mana-a-kitia rā Aotearoa.

Once students are familiar with the text, you can facilitate some of the second language tasks /activities below, working to your students’ strengths and interests. The aim is to extend their proficiency and use of te reo in meaningful contexts.

While facilitating these tasks/activities, remember that you don’t have to be the expert. As conveyed in the Māori concept of ako, you may be in the position of being a learner alongside your students. In fact, some students may want to take the lead. Ka pai tēnā. Nō reira, kia kaha.

Students match selected pieces of oral or written text from the story to associated pictures showing, for example, characters, dances, or maps that are randomly sorted.

Students combine pieces of text from the reader to make phrases:

Students make a judgement on whether a spoken or written statement about a picture in the book is true or false (kei te tika/kei te hē).

For example, for the picture of the noisy children in class, the teacher might say or write: Tino ngenge ngā tamariki.

If false, as above, the students must ‘make it right’ by providing the correct text that corresponds with the picture (Tino hoihoi ngā tamariki).

Give descriptions of a picture from the text, and students decide which description best applies.

For example, to describe the picture of the teacher:

Students sequence the following jumbled-up sentences from the reader:

Students negotiate their own tikanga for the classroom (or school or home) – and draw up a contract/kirimana.

Create gaps in the written text for students to complete. A cloze is a good way to help students notice the grammar of te reo Māori, as well as improve their prediction skills and encourage them to make intelligent guesses from context and picture clues. For example:

The gaps in a cloze can represent a consistent part of speech such as nouns or pronouns. Alternatively, words can be deleted at random, e.g., every third word.

Teachers can make a cloze exercise easier for students by:

A cloze task can be extended to incorporate listening and speaking, where you read a piece of text and stop at each missing word, so students can suggest an appropriate word to fill the gap.

Print the mini-book template (with instructions) so every child in your class can take home a mini version of this story to read with whānau.

The following waiata will support the kaupapa of the reader:

E toru ngā mea (reversioned by the author of this story, to the tune of ‘E toru ngā mea’ – and found on the accompanying audio component).

(There are three things, important things, according to the contract: Listen, look after things, and most importantly care about each other!)

In English-medium ECE settings, where Māori language is a natural part of the programme (as recommended in the Mana reo strand of Te Whāriki), the big books for Reo Tupu stories can be used for shared reading with tamariki.

These stories will allow teachers to weave Māori language and culture into their everyday activities, demonstrating the value they place on te reo and tikanga Māori. This is especially important for enhancing identity, sense of belonging, and well-being. The audio component of the e-books will support teachers and tamariki to pronounce te reo Māori correctly.

The following stories are relevant to the kaupapa of this reader:

Grace, W. (2006). The Tree Hut Treaty. State Services Commission, Wellington: New Zealand – a bilingual publication that shows children in the neighbourhood coming up with their own ‘treaty’ to negotiate their use of a tree hut.

Holt, S. (2016). Te Wairua o Waitangi. Hamilton, New Zealand: The Writing Bug Ltd – a book aimed at helping children understand how they can honour the Treaty through respect for Māori culture and as kaitiaki of Papatūānuku.

The author would like to acknowledge the teachers she has worked with over the years, inspiring her to create these books. Ināianei kua mātātupu. Ka tuku mihi hoki ki te whānau Laison nō Taranaki me te whānau Takotohiwi nō Ngāti Awa, who nurtured her in te ao Māori; ko te tino koha tēnā.